What Is Decentralized Autonomous Organization - A Detailed Overview

The rapid emergence of new trends in the blockchain and crypto space opens up a wide variety of exciting possibilities. As Web3 and blockchain become more widespread, new acronym, such as DAO is revolutionizing the 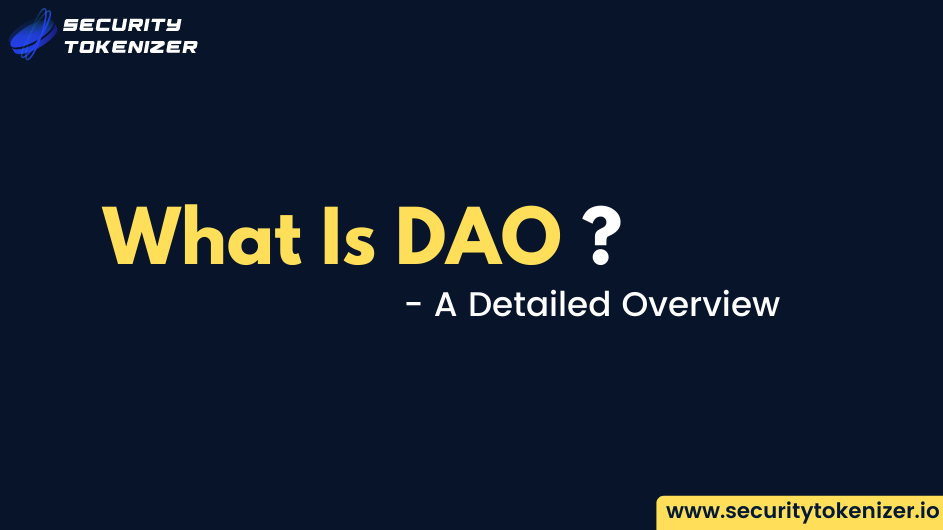 Home / Blog / What Is Decentralized Autonomous Organization - A Detailed Overview

The rapid emergence of new trends in the blockchain and crypto space opens up a wide variety of exciting possibilities. As Web3 and blockchain become more widespread, new acronyms, such as DAO is revolutionizing the

Decentralized autonomous organizations (DAOs) are similar to crypto clubs in that they often work toward a common objective, allow each member an equal say in decision-making, and can potentially have more money than most clubs could ever imagine.

What is a DAO?

An autonomous organization is precisely what its name implies: a group of people who get together without any choices being dictated by a central leader or firm. They're made via smart contracts on a blockchain (digital one-of-one agreements). Members of DAOs frequently purchase their way in by purchasing a governance token designed expressly for the DAO, which allows them to vote on decisions affecting how the pool of money is spent and handled. These communities can include people from all over the world who connect using Discord channels.

According to Jason Yanowitz, co-founder of crypto trading newspaper Blockworks, a DAO features a "totally flat hierarchy." "It's a method to control individuals in different ways based on a common balance sheet."

Every DAO has a built-in treasury to keep its digital currency, which members can only access with the group's agreement, and group decisions are decided collaboratively over a specified period of time. To create and start a DAO, follow these three steps:

Creating The Smart Contract: The DAO's developers create the smart contract(s) that will govern the group's rules and determine the group's purpose. Because the code can only be altered through a group vote once the DAO is launched, this step requires intensive testing.

Raising Funds: DAOso relies on a common currency cache that must be raised from their members. People who support the group's mission can buy into it hereby agreeing to purchase a particular number of tokens in exchange for a stake. This is also the time to set governance norms.

Launch: The code for the DAO is placed on the blockchain. From now on, it can only be amended by a majority vote of the stakeholders. The project is no longer under the control of the original developers.

Basically, A DAO's financial transactions and regulations are recorded on a blockchain. The smart contract, which also serves as a representation of the organization's regulations, holds the organization's storage. Because DAOs are open and transparent, no one can change the rules without the knowledge of others. Although we are accustomed to organizations with legal status, because a DAO can be formed as a general partnership, it can function very effectively without it.

Top DAOs You Must Get To Know

MakerDAO-Maker was one of the first Ethereum-based decentralized autonomous organizations (DAOs) to be founded in 2017. It allows DAI, a community-managed stablecoin pegged to the US dollar, to be issued and distributed.

BitDAO is one of the world's largest DAOs, with a community of BIT token holders powering and driving it. By leveraging next-generation web3 organizations and autonomous entities in the DeFi sector, the project intends to create a powerful decentralized ecosystem.

Aave is a decentralized lending system that pays interest to lenders who deposit monies into liquidity pools. Borrowers then utilize this liquidity to establish crypto collateral in order to acquire flash loans.

Uniswap is a decentralized exchange with a self-sustaining automatic trading mechanism that is one of the most popular. At the time of writing this in February 2022, its governance token, UNI, is ranked #1 on Coinmarketcap, with the greatest market capitalization among DAOs.

Aragon focuses on enabling clients to connect with anyone in a DAO infrastructure from any location. The Aragon DAO token, ANT, allows token holders to express their approval or disagreement with the decisions that affect operations. Aragon has one of the most popular DAO tokens, allowing token holders to form or join DAOs based on Aragon.

0x would also be mentioned frequently among popular DAO initiatives. It's an open protocol that allows for peer-to-peer asset exchanges on the Ethereum blockchain. Rather than upgrading to the core protocol, the DAO would concentrate on controlling the community fund. The DAO space could be dominated by 0x and its native token ZRX. And other top DAOs are DAOhaus, RaidGuild, Opolis, BanklessDAO, MolochDAO, BitDAO

The Future of DAOs

Also with the rising of the decentralized sector came a slew of powerful projects, and The DAO had the potential to replace traditional finance's hierarchical system with a democratic, community-governed one. However, more effort remains to be done in order to fully scale the promise of decentralized autonomous groups. The overview of several DAO projects demonstrates how DAO tokens can influence DeFi's future. In the list of finest DAO projects, you've seen crypto lending and staking platforms, liquidity providers, and crypto exchanges.

To become a member of a DAO, Users must first join DAO by purchasing its cryptocurrency. Having the asset offers users the ability to vote on proposals and modifications proportionally to the amount they own. I suggest Security Tokenizer, an exclusive cryptocurrency exchange, and Token Development Company that offers DAO Blockchain development services that you get the best way possible. Contact us for more queries.