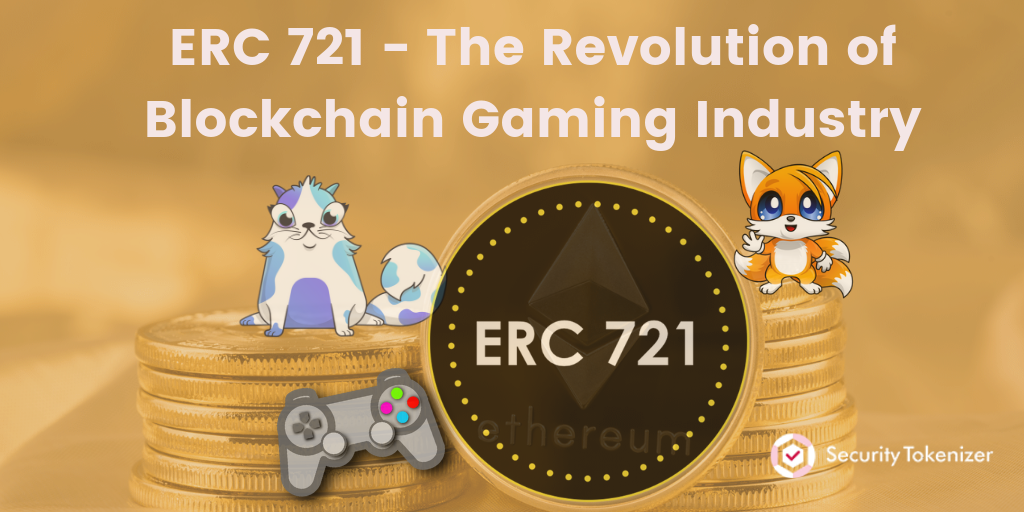 You can create your own game in blockchain with ERC 721 token standard that rules the blockchain gaming world in recent trends.

Here, we have a brief look about the ERC 721 token standard in the crypto world.

In this modern times, everyone knows, believes and try to implement the term “blockchain”. As it plays the main role in this tech world, many entrepreneurs are crazy in transforming their business across various industries.

In this current days, not only the financial sector experiences the effect of blockchain but also the gambling, medical, retail and insurance industries feels the impact tremendously.

Apart from all the industries, gaming is the one that accepts to be the most interesting industry in the application of the blockchain technology.

Recently, building blockchain and its applications require an intricate support in developing a cryptography and background coding as well as effective resources. As of now, times have changed drastically.

A few years ago, inconceivable applications including the basic rights of electronic voting and digital record maintenance of property assets are made developed now and set up very fast when compared to the previous technique.

As it is found to be easy for developers due to the tools availability in building decentralized applications. To that, Ethereum makes everything possible.

Ethereum is a distributed decentralized blockchain network. Though bitcoin and Ethereum found to be similar, there are few important technical differences that differentiates the purpose and capability of both. The most likely difference in Ethereum blockchain is instead of mining, here miners try to earn Ether which means a type of crypto token in the network.

What is Crypto Kitties Token?

CryptoKitties doesn’t mean a cryptocurrency. It operates on Ethereum blockchain network as a non fungible token. In this, each token is different that shows every CryptoKitty as unique in its value and validated according to the appreciation and the depreciation based on the current market.

To state, CryptoKitties can’t be able to replicate as another and also cannot be transferred by the game developers without acquiring the user’s permission. User can effectively interact with the CryptoKitties and have the access to sell, buy and breed them.

The ownership of CryptoKitty can be traceable through smart contract on Ethereum blockchain. Every CryptoKitty acts as a non-fungible token utilizing the ERC 721 standard.

Before getting into a blockchain game, it is better to know about the ERC 721 token standards and it functionality so that it gives you a clear cut idea in developing a game utilizing the most preferable standard that rules the blockchain gaming industry.

It is better to know about the token creation and token ownership of ERC 721 functionalities.

It is nothing but the balance of tokens. That is, setting up of an upper limit matters so that people not able to create tokens more than that limit. ERC 721 token creation is more complicated when compared to this. It maintains an array of tokens with each token separately added to the array.

In general, ERC 20 tokens and its ownership rights is written in the smart contracts. It includes the details of describing the data about the tokens addresses once the deal is performed. As it is fungible, these contracts will not get that much worry about the specific tokens and they all are found to be similar.

In converse, ERC 721 token is not similar to another token due to its non-fungible functionality. In this, not only adding an address and token balance to the contract is not enough but also unique ownership of the token is needed to get added to the contract.

As discussed, Cryptokitties has become viral and it is in peak to get much attention in future. In fact, it is considered to be the fastest expecting contract on Ethereum.

ERC 721 collectibles came with a proven way to adopt in the crypto world. However, there needs a lot of work before performing the crypto adoption. In that way, the idea of developing non-fungible collectibles on Ethereum blockchain holds a lot of possibilities and it will become more advanced over time.

To create your own game, utilize ERC 721 token standard that leads you to acquire the guidance of the best ERC token development company. There, securitytokenizer furnishes in offering you the customized token with an innovative platform as per your business demands.

Ping Here to Create and Shine with your own Ethereum Game

How to Create a Crypto Coin? - A Step by Step Guide

How To create A Token On Solana Blockchain?

How to Create a Cryptocurrency - Everything You Need to Know!

How Much Does It Cost To Build Bitcoin, Ethereum and Cryptocurrency?