How Blockchain Can Support To Detect Fake News In Social Media?

The advancement of technology, the availability of the Internet, and the rapid adoption of social media paved the path unintentionally for the viral propagation of fake news and hoaxes 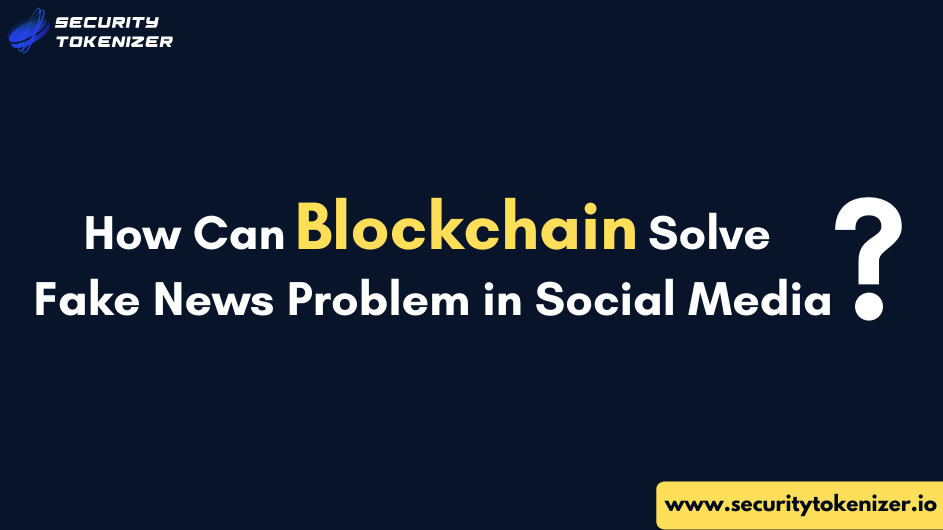 Home / Blog / How Blockchain Can Support To Detect Fake News In Social Media?

The advancement of technology, the availability of the Internet, and the rapid adoption of social media paved the path unintentionally for the viral propagation of fake news and hoaxes. People all around the world are profiting from fake news, either by presenting facts incorrectly in order to garner more viewers or by manipulating the public's opinion in order to influence their conduct in major societal events.

Hence, we decided to publish this article in order to overcome this obstacle. This guide will provide you with a complete overview of what fake news is all about, as well as the best option for dealing with this rapidly growing problem. Read this blog throughout the end to get bonus tidbits too.

What Impact Does Fake News On Social Media Have On Today's Society?

The way we engage with one another has changed dramatically due to the increased use of social media. Social media platforms have brought us closer together in new and impactful ways.

More people are using social media due to the growing popularity of a wide range of internet-enabled gadgets and enhanced mobile internet speeds. Indeed, two-thirds of all adults in the United States use it, and many of us get our news from social media posts.

Unfortunately, social media has a terrible side too: FAKE NEWS. Users can be influenced by misinformation, which can be used to manipulate them for political, commercial gain, or for any other purposes. What can you do to combat fake news and how can you recognize it?

Because there are so many different sorts of content out there, it's difficult to spot fake news.

1. Satire or parody – When fake articles are placed on websites just for the sake of entertainment and have no intention of deceiving others.
2. False connection - When the content of a news story is unrelated to the headlines, captions, or graphics.
3. Inappropriate context - When appropriate information is shared in an improper situation.
4. Imposter content - When legitimate sources are imitated with fictitious or altered sources.
5. Fabricated news - When news is fabricated for the purpose of making money or gaining fame.

What Is Blockchain Technology?

Blockchain technology is a public network of peer-to-peer nodes that keeps transactional records known as blocks, in various databases also known as the chain. This type of storage is commonly referred to as a digital ledger.

Every transaction in this ledger is authorized with the owner's digital signature, which verifies the transaction and protects it from tampering. Hence, the data in the digital ledger is extremely safe and secure when compared to other technologies.

How Does Blockchain Assist In The Detection Of Fake News On Social Media Platforms?

Blockchain technology has been dubbed the "emerging technology" that will transform the way information is produced and transmitted, and it has paved the way for the development of decentralized applications, with security as a major concern.

Because of the blockchain's traceability, openness, and decentralization, the problem of fake news can be efficiently addressed, as every transaction ever made is permanently recorded.

The blockchain-enabled platform can give online readers a secure way of verifying the content and its source.

Lemme explain some other benefits of blockchain technology,

1. Transparency In The News:

Because the blockchain can bring transparency, the entire globe will be able to determine whether the news is fake or not. The news' legitimacy will be determined by certain criteria generated in smart contracts, resulting in global confidence and transparency.

2. Traceability Of The News:

Blockchain-based systems can track the legitimacy of news from the beginning to the present day, as well as in the future. It will keep readers from falling for fake news.

The problem of fake news can be eliminated with the help of a decentralized news network. Furthermore, the lack of centralization for data storage assures that there is no single point of failure. SPOF (single point of failure) is a computer component whose failure would bring the entire system down.

The news information, videos, and photographs kept on the Blockchain are immutable, meaning they can't be updated, erased, or altered.

Are You In Need of A Blockchain Development Company?

Do you want to learn more about the ideal blockchain development company that can deliver all of this excellence? Then, take a look at our Security Tokenizer, a fully customizable and scalable solution built with cutting-edge cross-platform technology to scale as your business grows.

We're one dynamic team, buzzing like a bee to help you bring your ideas to life.

We never lose sight of the importance of establishing common ground with you so that we can collaborate.

Client satisfaction is our top priority, and we help you in converting your ideas into real products.

To discover more about us, just reach out the leading Token Development Company SecurityTokenizer. We show utmost care to you both before and after your product launch.

We've seen everything in this article that you need to know about how blockchain can help detect fake news on social media.

Now, it's up to you to make it a reality!

Bookmark this article and go over the steps again. It will help you in many ways,

Do you have something to say to us, or have we forgotten something? Simply ping us via email or via our social media platforms for any technical or non-technical questions.