What is Near Protocol? A Complete Beginners Guide

Explore Near Protocol with Security Tokenizer and understand how it works. 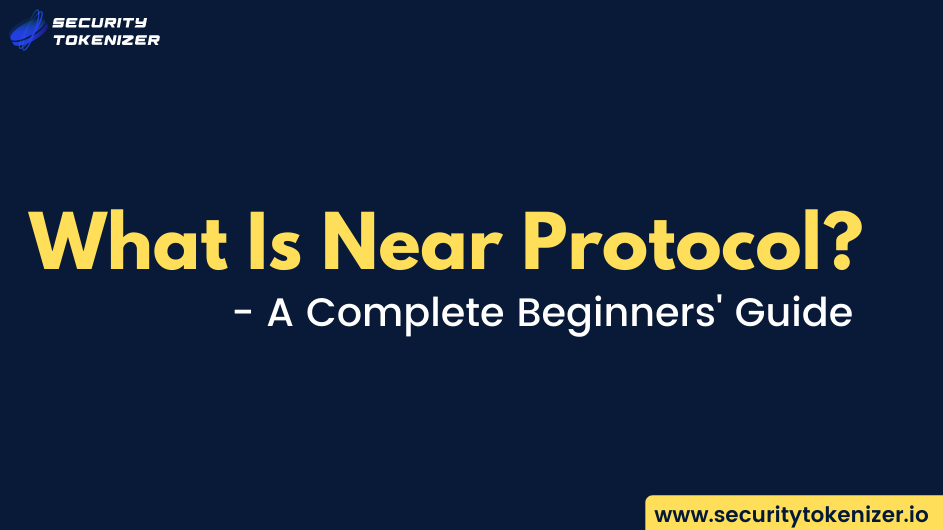 Home / Blog / What is Near Protocol?

TPOS, unlike other smart contract-enabled blockchain systems, has a predefined consensus method in which a wide number of players maintain the network, enhancing decentralization and security while also maintaining a fair reward distribution mechanism.

What is Near Protocol?

Blockchain technology has actually opened up a world of possibilities, and this has recently enhanced with the rise of the open web, which is also critical to sharing the economy's future.

The NEAR Protocol is an example of a decentralized blockchain initiative that aims to support the new open web by focusing on developer and user-friendliness. Before we get into the solution to the question, The platform, which strives to outperform Ethereum in terms of scalability and developer and end-user friendliness, is also noted for its developer and end-user friendliness. NEAR Protocol, for example, used human-readable usernames in place of the more common cryptographic wallet addresses. It also allows users to interact with dApps and smart contracts without requiring them to have a wallet.

How does Near Protocol Work?

NEAR, like Ethereum, Cardano, and TRON, is a "base-layer" blockchain, meaning it serves as the framework for other applications to be constructed and implemented.

NEAR achieves its massive throughput with a device called Nightshade. As a part of the scaling approach, individual sets of validators execute transactions in parallel over several sharded chains, increasing the blockchain's overall transaction carrying capacity.

This technique differs from previous blockchains' sharding systems in that each shard produces a fraction of the next block, referred to as a "chunk." To complete the transactions included within, these are processed and saved on NEAR blockchain network.

It's designed to make things easier for developers while simultaneously providing them with a robust toolkit with which to construct next-generation applications. Developers can create advanced apps that can sign transactions on behalf of users using NEAR's contract-based account model, allowing them to execute agreements without the user having to be physically there to confirm the action.

What is NEAR Token?

NEAR, like the great majority of blockchains, has its own native utility token, which is appropriately titled 'NEAR.' It's the coin that's used to reward nodes on the NEAR network, as well as to power transactions and many NEAR smart contracts.

NEAR token holders have the option of participating in the NEAR platform's on-chain governance as a community-governed platform or having a validator vote on their behalf.

The governance forum is currently hosting discussions about the development and marketing of NEAR products, as well as the NEAR ecosystem as a whole. Users can also contribute their ideas to the Github repository NEAR Enhancement Proposals (NEPs).

Governance of the NEAR Protocol

The NEAR platform is unique in terms of governance protocol in that resource distribution is not managed by the platform's decentralised autonomous autonomy (DAO). Instead, the platform has assigned the responsibility to the NEAR Foundation.

Protocol maintenance, ecosystem funding, and protocol governance are all handled by the non-profit organisation located in Switzerland. Furthermore, unlike most blockchain protocols, the NEAR Foundation board is in charge of appointing those who would function in the same role on the NEAR crypto network, Unlike most blockchain protocols, this protocol does not require nodes to vote for the reference maintainer.

The Future of Near Protocol

The Rainbow Bridge, NEAR's long-awaited Ethereum-to-NEAR bridge, was unveiled earlier this month. Users can now link their Ethereum ERC-20 tokens to NEAR and use them within the NEAR dapp ecosystem. This is a significant step forward in NEAR's efforts to make the platform as user-friendly as possible.

Get in touch with us for assistance in your crypto projects.